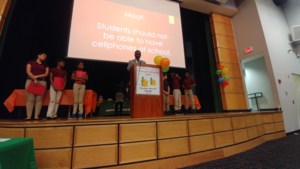 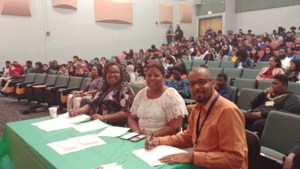 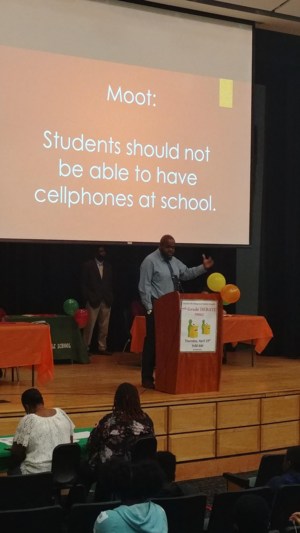 First ever 7th Grade Debate competition at HRMS was a phenomenal success.
HRMS hosted its first ever 7th Grade Debate competition, and it was a phenomenal success. Four teams went through three vigorous rounds debating exciting and controversial topics, and gave students an opportunity to practice their argument writing skills and also their oration skills.
In the end, the team of Crystal Malave, Miracle Malave and Adrina Lemus went up against the team of Jael Aguilar, Joshua Ferguson and Shytwan Gadson. It was a very competitive debate between both teams, but the girls managed to push forward and come out on top as Champions, with Best Speaker being awarded to Miracle Malave.
Both teams walked away with fantastic prizes such as huge cakes, medals, trophies, and certificates and a great feeling of accomplishment. "I am so happy that I decided to do this! Even though I was shy at first I now feel as if I could be a politician!" expressed Crystal Malave.
The principal, Mr. Baines who was also in attendance expressed how proud he was of all the participants and how thankful he was for this opportunity to support students in an academic competition such as this one.