HRMS Band Students Excel at the Regional and State Levels 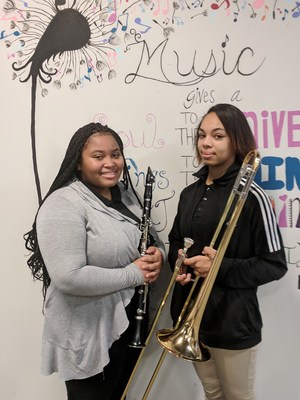 On January 20, 2018, nine Hardeeville-Ridgeland Middle School students traveled to Summerville High School to take part in the South Carolina Band Directors Association (SCBDA) Region 4 Honor Band Auditions.  These auditions are the preliminary auditions for the SCBDA All-State Band Auditions which would be held the following Saturday.

Teniya Cunningham, Ariel Monge, Mikayla Ferguson, Kira Tharp, Randi Hanney, Carmen Mulligan and David Marquez were auditioning for the first time and their primary goal was to audition for the experience.  Alyse Flores and Mikayla Blackshear had auditioned last year but did not score high enough to participate in either Honor Band.  All of the students had been preparing their audition requirements since the beginning of the school year.

Each student performed an audition of seven major scales (memorized), the chromatic scale (memorized), a prepared solo, two sightreading passages and five musical vocabulary words (chosen from a list of 45 words) for multiple judges.  They were scored using a state-wide assessment rubric.

After the preliminary regional auditions, Alyse was placed 14th in the clarinet section and Mikayla was placed 13th in the trombone section.  Alyse’s placement earned her an All-State Call-Back Audition.

Alyse traveled to Lexington High School on January 27, 2018 to perform her audition in front of a different set of judges.  This time, she was competing against the top 14 middle school clarinetists from each of the 5 regions in our state.

When the final results were posted on Sunday, Mikayla Blackshear earned 9th chair in the SCBDA Region 4 honor Band. She will participate in an honor band clinic at Charleston Southern University in February.