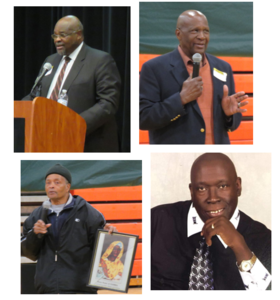 On Wednesday, February 27, three notable guest speakers from the SC Lowcountry shared stories of their lives and encouraged students to work hard and pursue their dreams.
--Rev. Kenneth Hodges, Pastor of the historic Tabernacle Baptist Church in Beaufort, told students that everything he learned in school has proven useful to him at some point, even if it did not seem relevant at the time. Former slave and US Congressman Robert Smalls is buried in the graveyard adjacent to his church and Rev. Hodges used Smalls as an example of how people from challenging circumstances can achieve greatness.
--Mr. Johnny Johnson has owned and operated Jackson Insurance in Ridgeland for over 30 years. He grew up in Jasper County and is a graduate of the county's public schools. Using his own life as an example, Mr. Jackson urged students to strive for success and never give up.
--Dr. Bill Singleton is a Jasper County native who served the school district for 33 years and was Superintendent of JCSD when the current school buildings were constructed. Dr. Singleton recounted the story of an emancipated slave from the Robertville Community who "stood up for what was right" and won a court battle against his former plantation owner in 1865.
--Chief Johnny Running Deer Bright is proud of his African, Cherokee, and Seminole heritage. "The Chief," as he is known by many HRMS students, had an interesting career as US Postal Service Detective. "The Chief" showed students photos and artifacts he collected in West Africa and advised them to begin thinking about and preparing for the career they wish to pursue when they grow up.