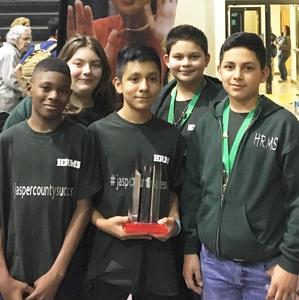 The Hurricane Alley Robotics Team competed in the FIRST Tech Challenge SC State Championship on February 22-23 at Gaffney High School. As part of the competition, each team must go through an interview process with the judges, as well as talking with the judges that wander through the pit area throughout the competition, observing and asking questions of the team. Our rookie team made Jasper County proud and received the Judges Award during the closing ceremony. The Judges Award is given at the discretion of the Judges to a Team they have encountered whose unique efforts, performance or dynamics merit recognition, yet the Team does not fit into any of the existing Award categories.

What the Judges had to say about Hurricane Alley:

“This team exudes enthusiasm for embracing the spirit of FIRST. We were BLOWN AWAY by this team’s total cohesion. This judge’s award goes to Team 15698 Hurricane Alley from Hardeeville, SC.”

Many thanks to everyone who supported the HRMS Robotics Club and made it possible for Hurricane Alley to attend the State Championship!